John Smith, current SAAA National Secretary and ex oil and gas exec from Perth, will be flying into Narromine Airport for AusFly in his home built Lancair Legacy VH-XTZ. John will be displaying his impressive Lancair along with many other Lancairs as part of the line astern fly-past.

John has been around planes most of his life – with both parents in the Royal Navy Fleet Air Arm.

“My first truly recallable memories of aircraft included machines like Vixens, Bucanneers, Scimitars, SeaHawks and Wasps – the Buccaneer was perhaps my favourite! But it wasn’t long before I became an avid model aircraft builder and ultimately began to fly the real the thing.”

John started out flying gliders in Southern England and then Scotland. He took up powered aircraft in Australia in the late 1980’s. He had always hired aircraft, until……

“I got more and more fed up with this and that not working. One day I was grizzling about this with a friend who knew something about Lancairs – well, it wasn’t too long before I was on the internet and salivating over a new shiny plane. I just had to decide whether it would be a Lancair Legacy or Lancair IV.”

John went to the Lancair factory in Redmond, Oregon in April 2008 to spend 4 weeks using their jigs to make sure the wings and tail feathers were stuck on straight and the right way around, and learning how to work with composites in aircraft building.

After 3200 building and finishing hours, John first flew his VH-XTZ on 23 December 2010. “About 2 1/2 years after I started the build, and with our marriage still truly intact and both kids still talking to me.” 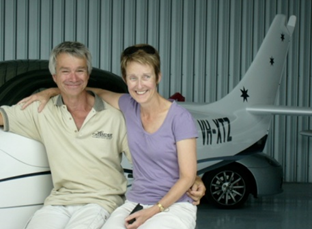 The first flight was troublesome, subsequently being told he had broken the law with a second person in the cockpit. “It turns out that in fact that wasn’t entirely the case –  and indeed an article in a late 2010 ATSB Flight Safety mag publication had a CASA article around when and why 2-pilot ops in Phase 1 were allowed.”

John was very glad to have had an experienced safety pilot, Peter Yates with him. “He set the first flight plan – one circuit and land for full stop.”

After a bumpy start to the VH-XTZ’s life, John now gets to fly it around 50 hours a year.

“The Legacy is such a wonderful aircraft and loves to work up in the flight levels where 220 – 230 kts burning around 40l/hr leaned deep LoP gives me great range making long trips a delight.”

John’s goal (it has been on his agenda for a while) was to obtain an Instrument Rating. “Whilst XTZ was always IFR certified, I  was not. But finally in May 2019, I obtained my rating and can now really begin to the most out of the aircraft and raise my piloting skills to another level.”

Whilst John spends many an hour on SAAA business, he is also part of the great ausFlt Team working to bring AusFly to general and sport aviation. “It’s time to knuckle down and think about flying over to Narromine again for AusFly!”